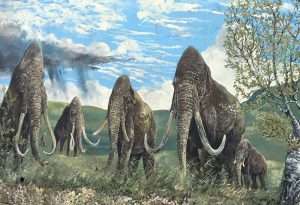 “History with its flickering lamp stumbles along the trail of the past, trying to reconstruct its scenes, to revive its echoes, and kindle with pale gleams the passion of former days” (Winston Churchill ).

The story of Sheringham stretches back over many centuries and is built around tales of ordinary folk who settled below the glacial moraine (the Cromer Ridge) left by the last Ice Age. The fossil record of the area has pointed to a marshland once inhabited by Mammoths, Wild Boar and Tigers to mention but a few species.

David Barber, a local artist, has caught this period on the wall mural facing out to the North Sea, below the Two Lifeboats Hotel and The Crown Inn. Evidence in the form of fossilized bones has come out of the Cromer Forest Bed, with an almost complete skeleton of a Mammoth being recovered in 1990 from near West Runton and other bones from the cliffs below Beeston.

Examples of flint Neolithic axes and arrow heads have been found on the beach with many good examples of the flint knappers work being seen in Sheringham and other Norfolk Museums. The area now occupied by our town was wandered by nomadic hunter gatherers, following the herds of mammoths that gave food and skins for tents and clothing.

Research by local historians points to an early settlement being that of Scira’s people. “ham” is an Anglo Saxon word for “small village”, so we have the ham of Scira’s people. Scira being of Danish origin possibly being linked with the Danes who came to settle in this part of East Anglia in approximately 750AD. Evidence of the possibility of early Roman settlement was discovered in 1956, when a domestic kiln was discovered whilst excavating at the Upper Sheringham Council Depot. Greyware Roman pottery was recovered.

The Domesday Survey completed in 1086 is the first real mention of Sheringham . In the survey the settlement is recorded as Silingham and tells us that it was made up of a population of 28 (10 villagers, 12 smallholders, 5 slaves and 1 freeman). The Survey also mentions a 4 acre meadow, woodlands, 100pigs, a church and church lands. The Lord of the Manor in 1086 was William of Ecouis. The mention of a church is probably that of the wooden structure that is thought to stand on the site prior to that of the current one of All Saints, Upper Sheringham being erected about 1400. 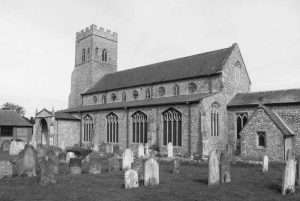 Records of the 17th and 18th centuries record storms that ripped into the cliffs taking chunks of land away (1789 and 1795). The storm of 1795 damaged land in front of the Crown Inn. Five years later in 1800 the Crown finally succumbed and crashed onto the beach.

In the wake of the Industrial Revolution 1760 – 1830 when we saw the transition from hand production methods to that of machines, new chemical manufacturing and iron production processes, the increased use of stream power, the development of steam power, the development of machine tools and the rise of the factory system. Although this had no immediate impact on Sheringham the foundations were being laid for a century of change and development in Sheringham, reflecting that which was happening in other parts of the country.

In 1805 a House of Industry, Workhouse, was built in Upper Sheringham. This was followed in 1811 by the Enclosure Award. Just over 200 years ago, in 1812, the owner of the Manor of Sheringham, Cook Flower, sold it to Abbot Upcher. So began the relationship of the Upcher Family with the folk of Sheringham. The family’s benevolence and impact on the life and development of Sheringham had begun and would be transformational. 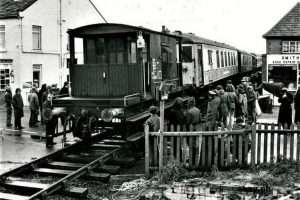 Railways had started to join towns and cities and the coast. From the 1840s a national railway network started to develop. It was on 16th June 1887 that the biggest factor in promoting growth in the town happened – the railway came to Sheringham. Now there was a direct line to London (3 hours 13 minutes) which in it’s heyday had 64 trains a day passing in and out of the station. With this came the development of what had been arable land. The Upcher family sold blocks of land for building – The Sheringham Building Estate – which included what we now know as Augusta Street; The Boulevard; North and South Streets; St Nicholas Place and Links Road to mention some. 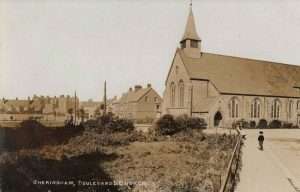 At the same time the Upcher family gave land for the building of a church with St Peter’s being completed in 1897 at a cost of £8000. 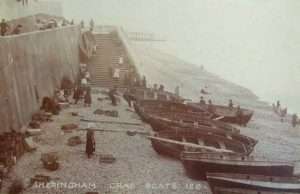 This last decade of the 19th century saw rapid development and the changing from a small fishing village, just down the coast from fashionable Cromer, into a thriving seaside town in its own right! 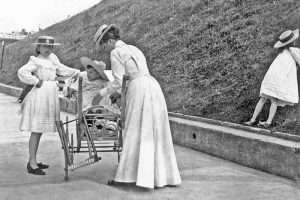 In the early 20th century Sheringham attracted the wealthy and famous. People came to Sheringham for the benefits of the sea and coastal climate, as well as to visit friends and join house parties arranged by those who had built holiday homes or taken lodgings for the season. The internationally renowned photographer, Olive Edis, who had her studio in Sheringham and was not just famous for her portraits of local fishermen and local people, but also photographic portraits of Celebrities and Royalty. Amongst those who visited and stayed in the town were Captain Robert Scott, Ernest Shakleton, Arthur Conan Doyle, Vaughan Williams, Albert Einstein, together with politicians, literary figures and the celebrities of the first two decades of the 20th century. Much more can be found out about those people to came to stay and live in the town by following the Blue Plaque Trail that is being installed within the Sheringham Museum. 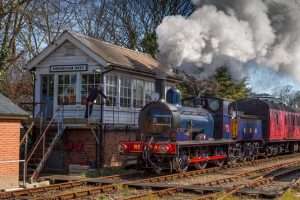 Today Sheringham is known as the Premier Seaside Town on the North Norfolk Coast with 1000s of people flocking here to holiday during the year. Alas the main line railway closed in the 1960s as part of the Beeching report hit the future of many rural lines and stations. Today part of the line is run as a heritage steam railway by the North Norfolk Railway. This alone attracts 1000s of visitors to the town. The wonderful floral displays that have given Sheringham Britain in Bloom awards, the golden sandy beaches and the extensive walks along the cliffs and through the woods of Sheringham Park and Pretty Corner, together with a nationally acclaimed Museum on the sea front are all great attractions.

The Museum has just been awarded the accolade of ‘Hidden Gem’ by Visit England! The fascinating story of Sheringham can’t be done justice to in these few introductory words. For those of you who want to find out more please visit Sheringham Museum.

Sheringham is a unique place with a very special atmosphere. Residents and visitors alike make the most of the variety of shops and attractions and the friendly welcome that always awaits one and all.

Text is the copyright of Timothy Groves, Sheringham Museum.

A brief history of the North Norfolk Railway